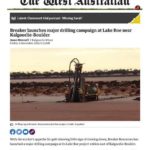 The West Australian With the market’s appetite for gold showing little sign of slowing down, Breaker Resources has launched a major drilling campaign at its Lake Roe project 100km east of Kalgoorlie-Boulder. The junior explorer yesterday announced it was upping the ante in a bid to grow its one million ounce resource at the Bombora […]