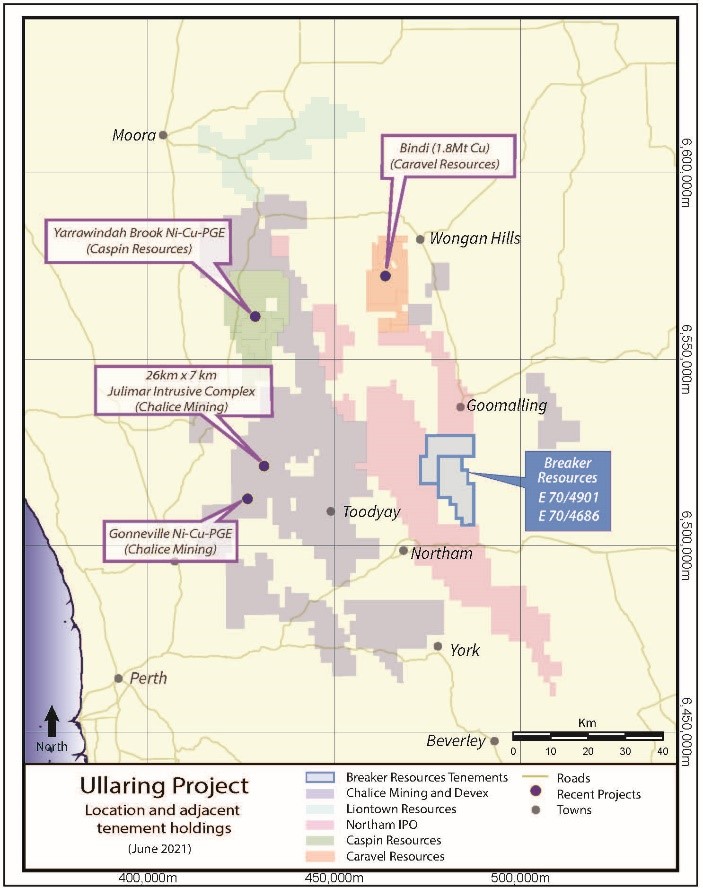 Breaker Resources pegged this project in 2014 and it is now part of an exciting new mineral province in WA’s Southwest Yilgarn following the world-class Julimar PGE-Ni discovery, and the growth of the 1.8Mt copper resource at Bindi 50km along strike from Breaker Resource’s Ularring project.

A review of historical exploration has identified:

Breaker Resources is taking steps to establish ground access and commence exploratory drilling following an extensive and positive review of the potential of the project. An Exploration Incentive Scheme (EIS) grant of $150,000 was received from the WA State Government in the September 2021 quarter for proposed diamond drilling.  The EIS initiative aims to encourage exploration in WA for the long-term sustainability of the State’s resources sector.

At Centre Forest, open file historical drill intersections of 61m at 0.81g/t Au 0.19% Cu from surface, and 25m at 0.46g/t Au (~180m vertical depth) indicate down-dip continuity of mineralisation (Open File Report A64958 Sipa Exploration NL 2002).  Intersections like this do not usually occur in isolation and are generally part of something larger, but there is insufficient drilling to assess the potential size of the mineralised zone.

Historical exploration has also identified a 15km x 10km groundwater tungsten anomaly, along strike from the Au-Cu mineralisation which has not been drill-tested. Given the close association of tungsten with Au-Cu mineralisation, this is a high priority area for further investigation.

The Ni-PGE potential is associated with an extensive, previously undrilled mafic-ultramafic belt which extends for at least 23km and which appears to be repeated by folding in the western part of the project, based on aeromagnetic data.