The project is situated between two operating gold mines on a recently identified southern extension of the 22Moz Laverton Tectonic Zone. 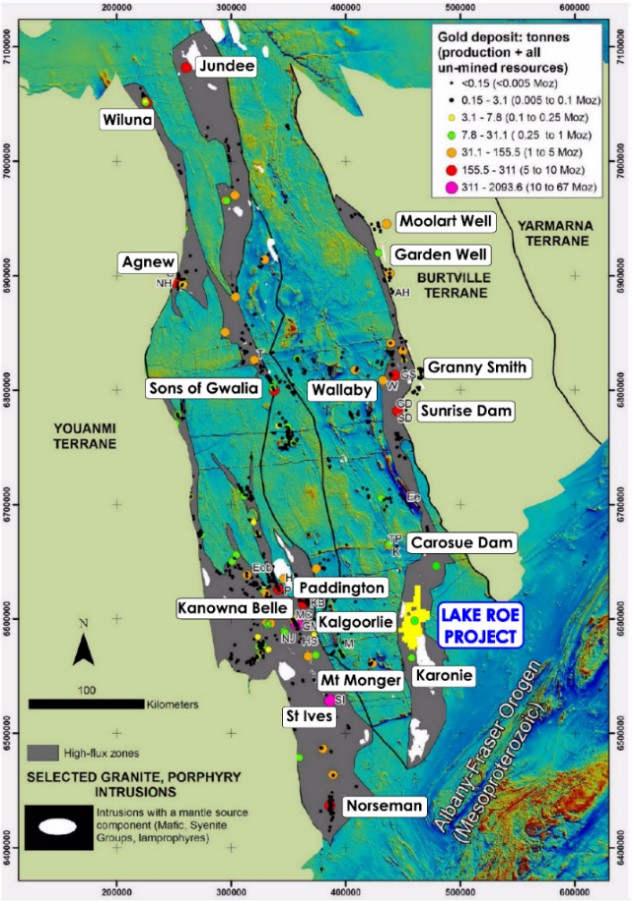 The project has the attributes of scale, high-grade and outstanding growth potential in a 9km-long gold system that is growing along strike and at depth. An interim Resource update is planned in the December 2021 quarter and follows a 40% increase in April 2021.

Gold at the main Bombora deposit occurs in a 150m-wide zone, starting 5m from surface in a 3km-long single pit configuration.

The discovery of high-grade lodes at scale below the open pit Resource in the last year is game-changing, indicating scope to transition from open pit to underground mining in the future, significantly enhancing operational flexibility and longevity.

The operational strategy is to expand the 1.4Moz Resource and develop a large, robust open pit and underground gold mine supported by major shareholders including Electrum Strategic Opportunities Fund II and Paulson & Co (20%), and Franklin Templeton (6%).

Breaker’s initial discovery at Bombora in 2015 is now 3.7km long and part of a rare 9km-long greenfields gold district with the noteworthy attributes of scale, grade and huge growth potential.  This, and the project’s proximity to two operating gold mines with processing facilities, makes it a highly desirable asset in an industry facing declining resources. 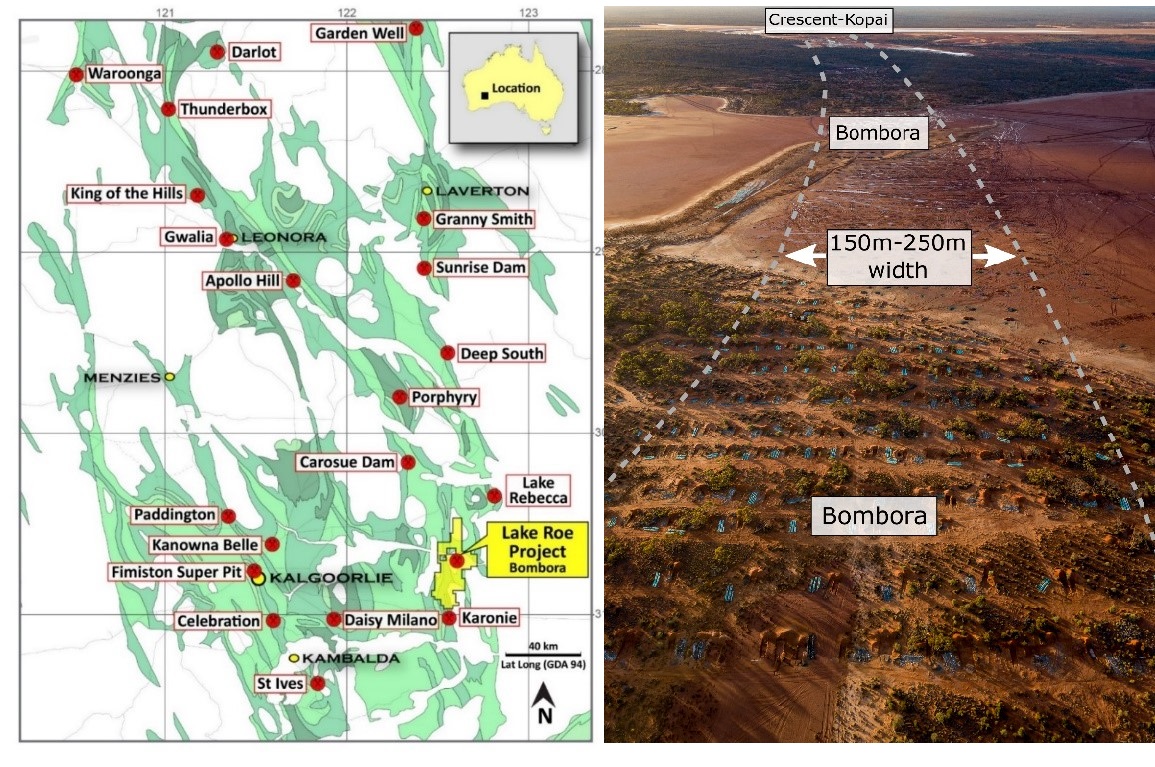 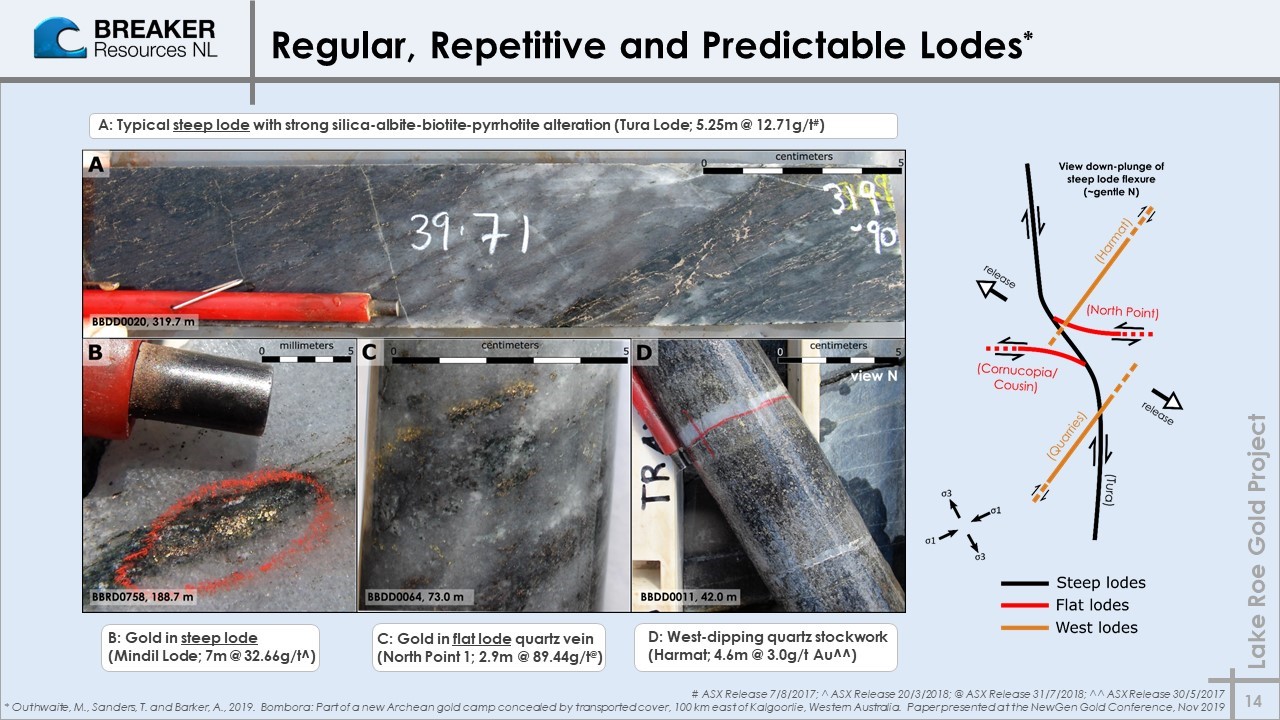 Gold starts 5m from surface and occurs in multiple lodes over a 150m-wide zone over a 3.7km strike length with a gold endowment of 4-5,000oz per vertical metre.  An open pit at least 3km long appears likely.

Drilling below and along strike from the 3.7km-long Bombora deposit continues to discover show predictable and continuous high-grade gold over large distances.

An interim Resource update is planned for the December 2021 quarter and follows an April 2021 Resource update by Optiro Pty Ltd, which expanded the Resource by 40% to 1.37Moz, including maiden estimates at the Crescent-Kopai and Claypan deposits, and a maiden underground estimate.

The west-dipping Quarries fault which hosts the gold at Bombora South can now be traced over a 3.5km distance extending from Bombora South into the partially drilled Carbineer area to the northeast. 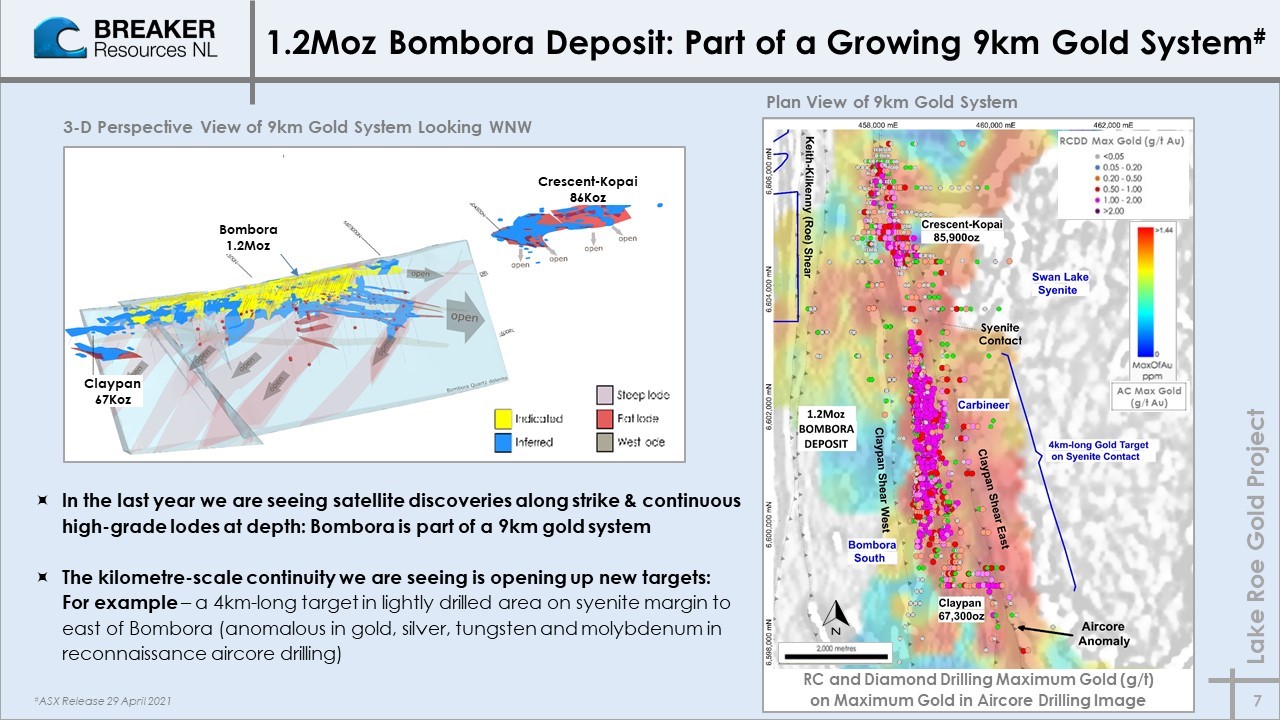 In the last year, it has become obvious that the three lode orientations at Bombora are part of a regular network of kilometric-scale faults with good predictability extending over 9km.  This understanding is important as it predicts continuity, which we are seeing, and it de-risks future mining.

This opens up the gold potential in several new areas, including along the syenite contact 600m to the east of Bombora, into which the gold-bearing structures at Bombora can now be confidently traced.

Transformational high-grade lodes discovered at scale below the 3.7km-long open pit Resource in the last year are showing the makings of a substantial underground mining proposition that builds on the large open pit resource already defined. 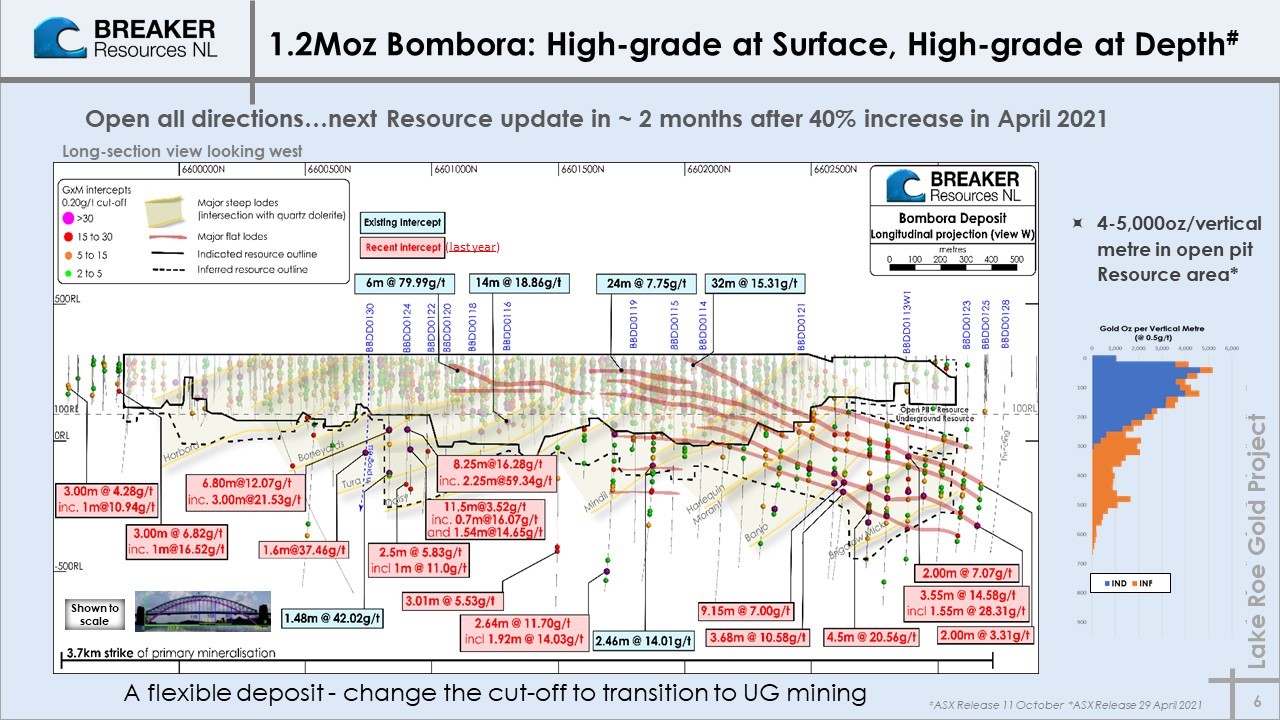 The high-grade Northern flat lode array below the northern part of Bombora is over 2.2km and is open to the north. 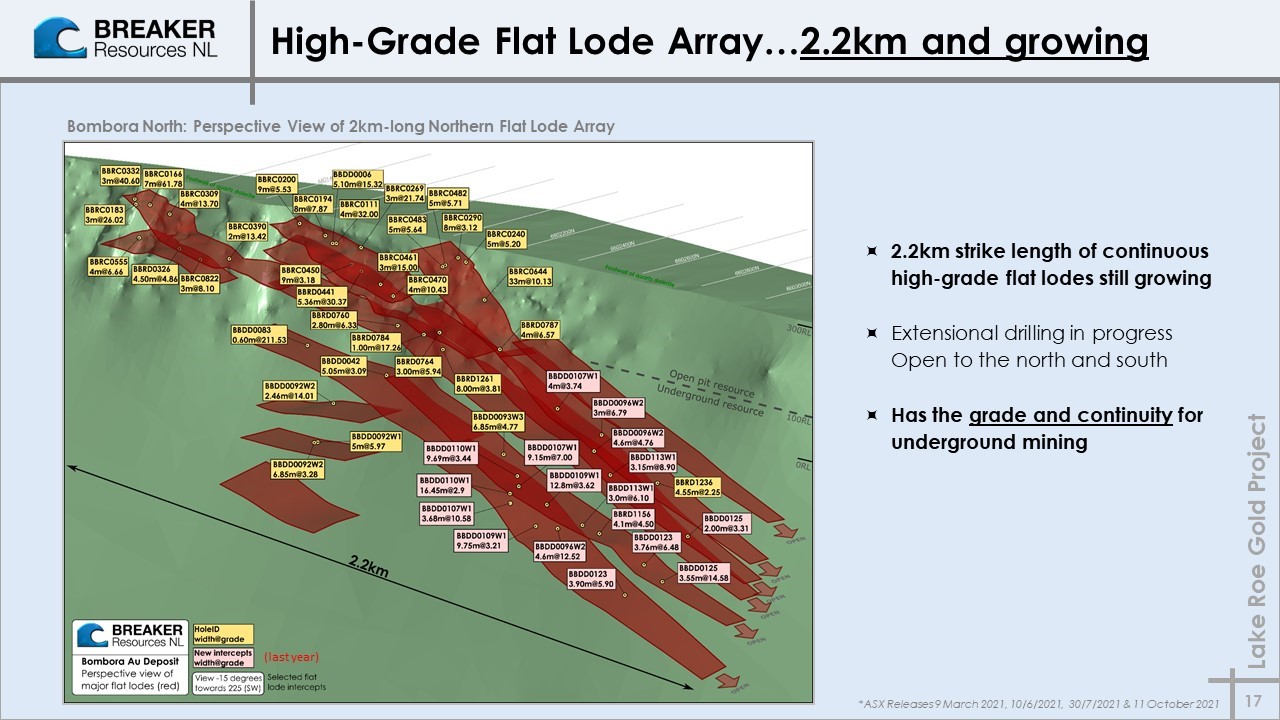 High-grade gold on the Tura steep lode now extends 900m down-plunge and is still growing to the south. 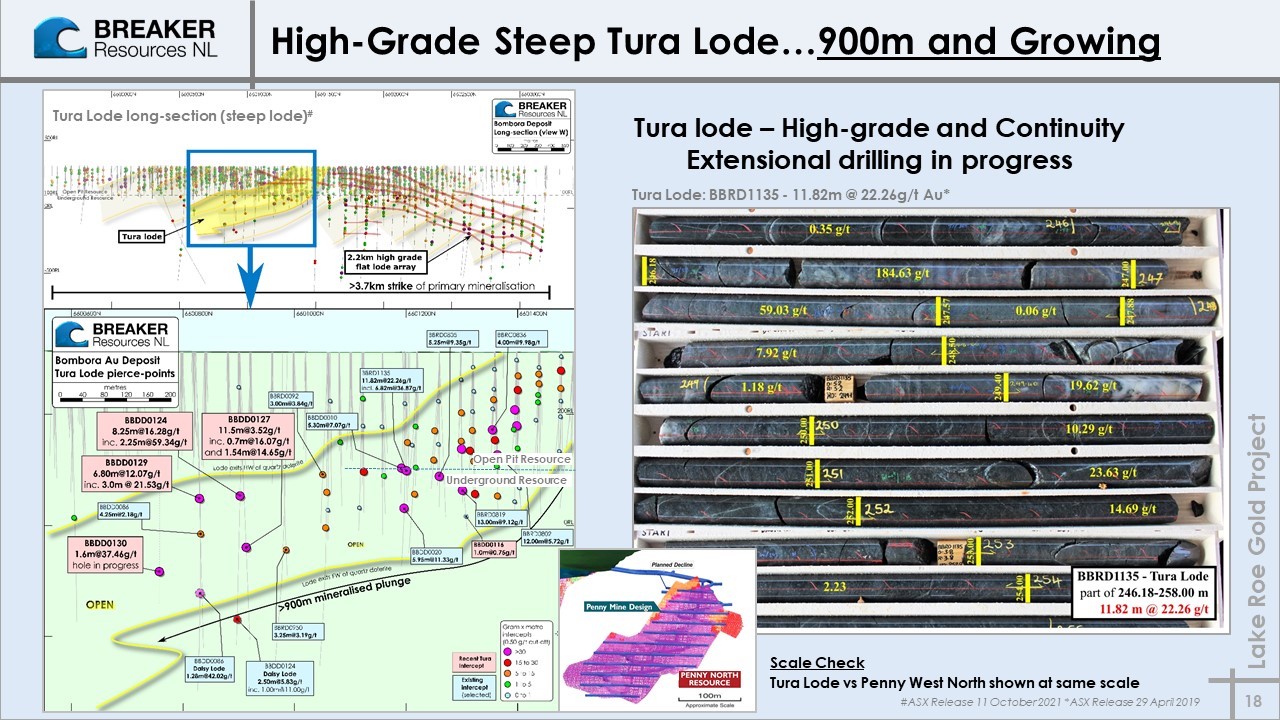